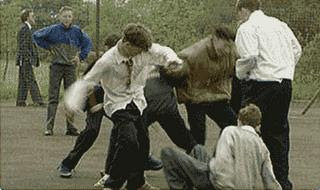 The hypocrisy of the mainstream media. The double standards.

A whole book could — and should — be written about the topic. If it were, it wouldn't of course get published. The last thing the MSM does is permit genuine criticism of itself. Phoney critique, yes. So if you want to pretend (say) that the media is inhibited about presenting sex, or injury/suffering — which is nonsense but a trendy thing to say — you could no doubt make a TV programme based on that assertion. As for real self-critique: when has the BBC ever made a programme about the cultural establishment's 'liberal' bias? Or a British university sponsored research about the anti-capitalist agenda prevailing in the humanities?

Take education for example. We hear endlessly about the faults of private schools. The drugs, the dodgy housemasters, the sexual shenanigans, the exorbitant fees, the strange admission policies, the terror of boarding, the artificiality of gender segregation, etc. etc.

Yet the horror of state comprehensives is rarely talked about. When it is — as recently by Andrew O'Hagan in the Telegraph, commenting on the Ruth Kelly incident — it's all mince, mince, I'm so sorry to say something unacceptable. It doesn't help, of course, that the people who feel most entitled to express themselves are those lucky enough to have been educated privately. State school products are often too crushed to even feel resentment at the system which damaged them, let alone express it. When they do feel resentment, they are more likely to rail against those who escaped the system than against the system itself. See e.g. Polly Toynbee, whose entire political philosophy probably stems from having failed the 11-plus and ending up at Holland Park Comprehensive. (Which, mind you, is barely a comprehensive in more than name, being used as a kind of posh 'state' school by well-heeled Kensington socialists.)

As someone who has personal experience of both sides of the private–state school divide, I say that comprehensives are places of horror, particularly for anyone of above-average intelligence. Middle class parents should try at all costs to keep their children out of these hellholes.

If you have never attended a comprehensive for any length of time, don't even begin to think you can make a considered judgement about whether they're tolerable. We ought to have a rule (particularly for Labour politicians) that no one should be able to advocate state education unless they have had personal experience of it.

So what punches does our dear Mr O'Hagan pull, implicitly praising state schools with his faint damnation?

It would be disingenuous for me to pretend that our local state secondary would be perfect for my teenage stepsons. For good or ill, they have been brought up with some sensitivity and with some - perhaps too-great - application of adult attention, and this could very easily make them cannon fodder in a rough school.

It's almost taboo to admit that, but there you have it. Every middle-class parent knows it's true. I'm afraid some parents like to dress it up with talk of learning difficulties and troublesome catchment areas and all the rest. Our local Church of England church is crammed with people every Sunday, a great many of them keen to catch the eye of the minister who will sign forms allowing their children to attend the reputedly very good primary school next to the park. And all the parents I know - Lefties no less than Right-wingers - look with hungry eyes at the property pages, imagining the good schools that might lurk just beyond the boundaries of those small London gardens.

How very amusing. Middle class parents forced to scurry around in desperation, hoping there might be some loophole which will allow their offspring to escape being herded into mass indoctrination/torture centres. That's probably not unrelated to the kind of amusement Gulag prison wardens (I'll resist the Nazi analogy) enjoyed, watching their charges try to derive small amounts of escapism among their daily routine of suffering.

I'm reminded of Peter Mandelson's comments on state education in his book The Blair Revolution:

How can schools cope with unwilling attendees? Teaching can be a gruelling and dangerous experience. Schools require a much tougher set of disciplinary sanctions to deal with unruly pupils – such as weekend detention, and banning of favourite leisure pursuits.

If you try to evade the bullying, you will be persecuted even harder. Something which will no doubt also apply to those who will, in the future, have to stay on at school beyond 16.

Update
For a link between the absurdity of Celebrity Big Brother, and ideological indoctrination in state "schools" — of course there is a link, this is New Britannia — see Tom Paine's Last Ditch.
posted by Fabe Tassano
Email ThisBlogThis!Share to TwitterShare to FacebookShare to Pinterest
Newer Post Older Post Home