"to Tatify" = to turn into po-mo trash 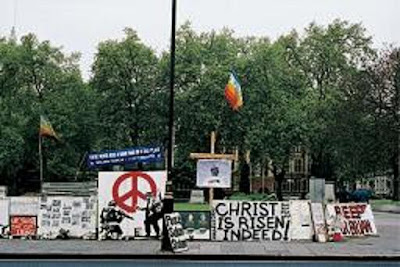 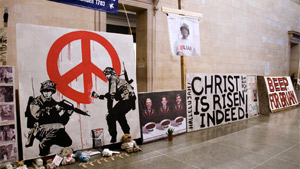 When I started to read this FT article about someone's protest assemblage against the Iraq war — which had been removed as a result of Labour authoritarianism — being turned into art by the Tate, I thought:

It's pushing it a bit to treat a protestor's placards and associated paraphernalia as art. On the other hand, it is a piece of real life, it's vaguely interesting and it's being preserved from the depredations of government repression.

Reading further, however, I discovered that it's not just the bits and pieces being put on display qua work of art by creator Brian Haw. No, it's a reproduction of the entire piece, painstakingly recreated, but posing as a piece of art by 'artist' Mark Wallinger.

Tate Britain claims that Wallinger's purposes are different from Haw's. Well it would, wouldn't it.

In bringing a reconstruction of Haw’s protest before curtailment back into the public domain, Wallinger raises challenging questions about issues of freedom of expression and the erosion of civil liberties in Britain today.

Perhaps. Personally, I think the effect is more likely to be the same as that of all the other contemporary art that is based on the key mediocratic themes of derivation, recycling, and ironic references. I.e. a sense of deflation.

Wallinger 's work, which basically amounts to a postmodern take on the original (Baudrillard, who thinks there are no longer originals only imitations, would no doubt approve), is less not more likely than Haw's version to make people think about the underlying issues. La la la, nothing really exists, everything is socially constructed.