WHAT IS WRONG WITH YOU PEOPLE?!

FINAL UPDATE October 2007
This post mysteriously still seems to get about 10% of my daily page views. How do blog visitors get to it? The only thing which distinguishes it are the title in capitals, and the fact that it had about ten times as many comments as any other post. Anyway, please note: the debate about this issue has moved to the dedicated blog set up to oppose "educational conscription".

Latest update
We need more ideas and action for purposes of organising a little bit of counter-agitprop. C'mon people, take it seriously. "It's no game", as a man by the name of Bowie once put it. We are, in effect, being punished by the Left for the failure of their asinine policies to achieve equality of outcome. And the punishment will not stop with this one.
— Surreptitious Evil has come up with three good ideas, so can those who care about liberty help to take these further please: 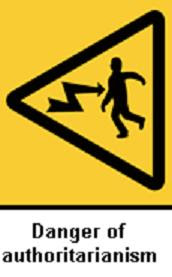 I use capitals very very rarely. So you can be sure I am being deadly serious. "You people" is not aimed at anyone in particular, just the population in general. Or those who can still think straight.

The proposed scheme to force 16-18 year olds to go to school is a TOTALLY IMMORAL infringement of civil liberties.

A person aged sixteen is certainly old enough to make up their own mind about education, never mind the utilitarian arguments for or against.

Whatever next, curfews for the 18-21 age group?

But where is the outrage? Apart from Not Saussure*, and Celia Green, I haven't seen much out there except the usual "oh well, it's NuLabour, what do you expect". Can't see anything on libertarian first-port-of-call blog Samizdata, nor on Devil's Kitchen. (Some f-ing and blinding would be really useful round about now, DK. Especially now that you have an explicit channel to the mainstream media.)

Come on, people, stand up for our liberties before it's too late. If you let them win this one, it'll only encourage them to go for the next one. And seventeen-year-olds cannot be expected to stick up for their own rights by themselves — for one thing, they're not allowed to vote.

Someone please start a petition website or something. Better still, organise a rally. You start it, I'll promote it. There's a new slot in my sidebar for stuff.

This is not just a minor issue for moral philosophers or libertarians to debate. This is real and it's serious.

* whose nose I may have put slightly out of joint, because I picked up on a throwaway remark of his rather than praising him for being critical — apologies, NS.

“She deserves recognition.”
Professor H.J. Eysenck
“I don’t doubt that she is a genius.”
Professor Antony Flew

RIGHT OF REPLY
In case of inaccuracies in material appearing on this blog, please email me.