The (equity market) sky is falling! 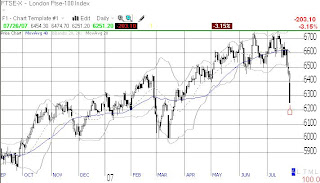 ... Well, it will one day. There is definitely too much credit out there, in my humble opinion. And we are starting to see chickens coming home. Private equity buy-outs are in trouble; appetite for debt is — understandably — waning.

How serious is the risk of contagion for markets?

One should certainly be aware of risks but a degree of perspective is also required. Investors need rising markets but many regard them with fear, for psychological and emotional reasons. This is not entirely irrational because there are occasional crashes but fortunately these are infrequent.

Following the Crash of '87, many normally sensible people feared a worldwide depression. It obviously didn't happen - there wasn't even a recession, and markets inevitably recovered. However many investors experienced self-induced white-knuckled anxiety for the next several Octobers.

Acquired Immune Deficiency Syndrome (AIDS) has certainly been a human tragedy but it has not resulted in the decrease of global population that many once feared would result in an economic depression.

The next major downturn was the Asian Financial Crisis in 1997, certainly a serious event for the region. An obsession with anniversaries has given rise to a new fear, aired on financial channels recently: '87…'97…'07??? To ask the rhetorical question: How analytical is that?

In 1998, John Meriwether of Liar's Poker fame and two members of the Nobelity gave us the Long-Term Capital Management collapse, which some saw as sufficient reason for a worldwide derivatives collapse, leading to (you guessed it) a depression.

Remember the Y2K paranoia, when on the first day of the new millennium our refrigerators were supposed to fall out of the sky and airplanes switch off, or was it the other way around? Whatever, a depression was certain to follow, we were told.

We did have the TMT crash in 2000, which also revived depression fears. And remember SARS (severe acute respiratory syndrome)? This minor but fast spreading (until isolated) pandemic in 2002 increased anxieties. When that threat faded, the same people worried about a bird flu pandemic, potentially causing an economic depression. In 2005, the World Health Organisation (WHO) forecast that a bird flu pandemic was inevitable and would kill up to seven million people worldwide. For the next year, everyone issuing a bullish stock market forecast felt compelled to hedge it with the pandemic warning.

This short review of modern financial history reminds us that bad stuff occasionally happens, but not nearly as often as forecast. In fact, we could assume that widespread bearish forecasts are, for investors, the equivalent of the canary in the coal mine, happily singing away.