Sometimes there is a pleasing congruence between observations of ideology first made in the Mediocracy book, and subsequent expressions of that ideology. For example, on the subject of art I wrote:

What passes the mediocratic criterion for art is that which has the appropriate ideological effect. ... Good mediocratic art should make the audience accept their subordination to the physical, and to society ...

One method particularly likely to gain approval is ‘subversion’. But only subversion of things which are safe to subvert, e.g. capitalism or bourgeois culture. Never subversion of the central tenets of mediocracy, such as equality ...

The old-fashioned idea of artists — exceptional individuals free to pursue their creative drives without reference to society — is considered dubious in a mediocracy, as it conflicts with concepts such as awareness and responsibility. However, two ersatz versions will be permitted. First, there will be support of approved serious artists, who need not have much originality but must convey the right ideological messages ...

“I don’t think art is necessarily about skill. It might be about semantics or about putting two things together.”

Parker here managed to express several ideologically correct positions: (a) art is not about ability but about 'semantics', i.e. socially agreed conventions; (b) art is about 'putting two things together', i.e. anyone can in principle do it (fairness, egalitarianism); (c) since no special skills are involved, those to be considered artists must simply be those whom the collective happens to have appointed to that role.

Last week in The Times, we had appropriate confirmation of the ruling ideology, in the form of an article about Parker and her latest piece of work — a video of Noam Chomsky.

A year after she had been to [a seminar on environmental issues], she was invited to a biennale in the United Arab Emirates. The theme was “art, the environment and the power of change”. And Parker could hardly miss the irony. This was “the most consumerist, most decadent oilproducing nation in the world.”

At first she thought of showing her forest fire piece. But then she decided she wanted to be more direct. She decided to invite the outspoken, left-wing intellectual Noam Chomsky to come to lecture at the biennale ... When Chomsky couldn't come, she compromised and asked for an interview. “I wanted to do something very minimal: to include just him. And I wanted it to be as open to interpretation as possible, so I took all my questions out and just left his answers.” This is the film that she now presents at the [Whitechapel Gallery].

It is called Chomskian Abstract, and it consists, quite simply, of footage of Chomsky talking about current affairs. His jersey is scruffy. His hair is grey. His delivery is calm. His words are measured and thoughtful and his opinions are clear and completely uncompromising.

"It consists, quite simply, of footage of Chomsky talking about current affairs." Even pretence that we are dealing with art rather than politics can now be safely dropped, it appears.

We are already supposed to know that art essentially is politics. The descriptions of the recent Turner Prize nominees make that clear.

Zarina Bhimji has travelled extensively throughout India, Zanzibar and East Africa. Immersing herself in their discrete yet intersecting histories she took numerous photographs, studied legal documents, conducted interviews and read the biographies of policy makers in the shaping of British power within those countries.

Nathan Coley explores how power can be inferred through architecture and public space. ... Annihilated Confessions present exquisite framed photographs of confession boxes obliterated by black spray-paint, referencing street graffiti and censorship ... Like absolution, the works examine how power can be inferred whilst not, in fact, being visible during correspondence. Referencing a famous song of English patriotism, his art piece Hope and Glory presents us with a generic English house, hand-built and imbued with a sense of incompleteness. Its physical status is unclear. The work explores how ideas of Englishness become entrenched in national memory, informing territorial identity.

With art's purpose now being the assertion of social and political statements, it makes sense to regard the artifice of aesthetic creation as de trop and switch to politics pure and simple. At first, journalist Rachel Campbell Johnston seems to have some qualms about whether a video of Noam Chomsky talking about politics should count as art. 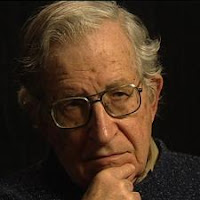 The problem with the finished piece ... is that it is not visually interesting ... All signs of artistry have been wilfully eradicated. It is all but indistinguishable from a piece of political propaganda. It is potentially as boring and, presented by any lesser artist, would feel pretentious to boot.

However, we must recall the contemporary re-definition of art: a visual product that challenges bourgeois preconceptions. As such, Chomskian Abstract is arguably a success.

Parker has ... earned the right to our attention. And that is why it is worth pausing and giving her the benefit of the doubt. Chomskian Abstract is not a great work of art. But it may turn out to be important. Parker is obviously struggling to find a way to embrace her new passion ... the work has a present point in that it expresses dissatisfaction with what art can achieve. Its dullness gives art's failures a visual form ... “Art is always about reappraising the way we look at the world,” Parker says.

So art that appears poor, vacuous or banal is simply 'expressing dissatisfaction with what art can achieve', and should therefore be applauded. Provided, of course, that the artist has been duly accredited by the mediocratic elite. Banality created by a nobody would not do at all.
posted by Fabe Tassano
Email ThisBlogThis!Share to TwitterShare to FacebookShare to Pinterest
Newer Post Older Post Home