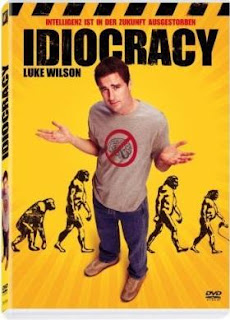 Via a post about “Decline and Fall” at Gates of Vienna — where contributor Dymphna is kind enough to refer to me as “a cool guy” — I discover there is a movie called Idiocracy, starring Luke Wilson and made by Beavis & Butt-head creator Mike Judge. Judging from this review, while certainly no more puerile than (say) Goldmember, it’s not quite my cup of tea — though this video did raise a chuckle.

However, I do find the following paragraph from the Wikipedia article very interesting, as an illustration of the ideological taboos present in the US movie industry.

As of February 2005 the film's scheduled release date was August 2005, according to Mike Judge. In April 2006, a release date was set for September 2006. In August, numerous articles revealed that release was to be put on hold indefinitely. Idiocracy was released as scheduled but only in seven cities ... and expanded to only 125 theaters, not the usual wide release of 2500-3000 theaters. ... [20th Century Fox] did nothing to promote the movie — while posters were released to theatres, no movie trailers, television ads, or press kits for media outlets were provided. The film was not screened for critics. Lack of concrete information from 20th Century Fox led to speculation that Fox may have actively tried to keep the film from being seen by a large audience, while fulfilling a contractual obligation for theatrical release ahead of a DVD release ... In the New York Times Dan Mitchell argued that Fox might be shying away from a cautionary tale about low-intelligence dysgenics.

This is all highly compatible with the il-liberal bias prevailing in the current cultural establishment. At least the NYT recognises that the suppression might be linked to the anti-egalitarian themes of the movie. In Guardian-world, on the other hand, suppression of a Western cultural product can only be due to the fact that it criticises capitalism and/or America.
posted by Fabe Tassano
Email ThisBlogThis!Share to TwitterShare to FacebookShare to Pinterest
Newer Post Older Post Home

“She deserves recognition.”
Professor H.J. Eysenck
“I don’t doubt that she is a genius.”
Professor Antony Flew

RIGHT OF REPLY
In case of inaccuracies in material appearing on this blog, please email me.